One of the all-time favorite books of the Let’s Read Math program is The Greedy Triangle, in which a triangle decides he is bored with life as a triangle and wants to have another side, making him a square. Not content with just being a square he subsequently turns himself into a pentagon, a hexagon, and so on until he is a circle. The story ends with the triangle deciding maybe he is better off just being himself. 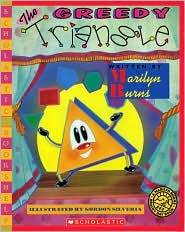 The Greedy Triangle by Marilyn Burns

This story is just one of many used in the Let’s Read Math program, which offers an innovative combination of math-related stories and hands-on activities to get students interested in the subject. This replicable, scalable program was first designed by Claire Passantino of the AAUW Makefield Area (PA) Branch in 2005. The AAUW West Chester–Chester County (PA) Branch signed on soon after when Graham Boose, former branch president, heard about the project at a conference and attended one of the student workshops at a Makefield community library. Graham quickly became an advocate of the project, and in 2007 the West Chester–Chester County branch was awarded a Community Action Grant to spread Let’s Read Math.

The grant money awarded to the West Chester–Chester County Branch is distributed among other AAUW branches interested in adopting the program for supplies, training, books, and so on. Once a branch expresses interest, they are trained in how to conduct Let’s Read Math workshops for students. After the training, the branch then decides if and how they can use the program in their community. “There is no one set way to implement the program, so branches decide how they want to use the materials and the venues in which to run the program,” explained Graham. Some AAUW branches may choose to go to libraries, day camps, or after-school programs themselves to read math-related stories and lead hands-on activities with students. Other branches work with outside organizations, such as the YWCA, Girl Scouts, and others, training them to conduct the workshops and take on the direct teaching role.

According to Graham, Let’s Read Math benefits branches because it “energizes people, brings publicity, creates fellowship among members, and builds community ties.” Some of the best feedback, however, comes from the students themselves. Graham tells the story of one young girl who doubted her math skills, claiming that the class’s math genius was sitting across from her and that she couldn’t do math. To Graham’s delight, at the end of the workshop that little girl was just as proud as the math whiz about her handcrafted marshmallow and toothpick geodesic dome.

Aside from the positive feedback, perhaps the biggest selling point of this project is its ease. Since the beginning, the goal of Let’s Read Math has been to create a project that anyone, not just educators, can use. Its “cookie-cutter” design has easy-to-follow instructions. “Our experience has been that this innovative and fun project, consistent with AAUW’s mission and focusing on STEM skills, has reenergized branch members to focus proactively on contributions that the branch can make to the community,” said Graham.

Any branch or organization interested in learning more about or donating to Let’s Read Math should visit www.letsreadmath.com.